Rania Matar at the Transformer Station

Rania Matar met with the Friends of Photography of the Cleveland Museum of Art at the Transformer Station on November 17 in Ohio City to conduct a tour of In Her Image: Photographs by Rania Matar. Organized by the Amon Carter Museum of American Art, it consists of excerpts from four series in color featuring portraits of girls and women, in the US and Lebanon. 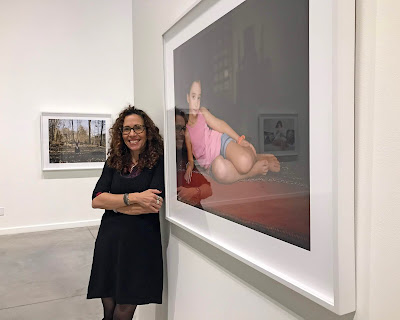 Though trained as an architect, Matar told the crowd that she “fell in love with photography.” This happened through the process of photographing the simple, mundane moments of the lives of her four children in the late 1990s. Before she knew it, Matar says, she had embraced photography full-time.

After 9/11, the Lebanese-born, Boston-based artist became interested in telling a different story of the Middle East than what Western media portrayed and one that countered “the rhetoric of the news.” Matar also wanted to explore her dual identity; “I was them and us,” she explains. At the time, she worked in a documentary style and she later shifted to portraiture.

The obliteration of stereotypes has continued in Matar’s portraits. Commenting on Samira 17, Bourji El Barajneh Refugee Camp (2016)—in which the subject wears a vibrant red headscarf and meets the viewer’s gaze—Matar says, “[W]hat I love [is]…there’s nothing oppressed about her.” When her portraits taken in the Middle East and the US are viewed as a whole, she feels that the universality “combats the otherness.” Her Majesty Queen Noor of Jordan has described Matar’s portraits as defying categories such as “simply American,” “simply Arab,” or “simply Muslim, Christian, or Jewish,” which reflects the fact that the Middle East and the West “do not constitute mutually exclusive worldviews.” (1) 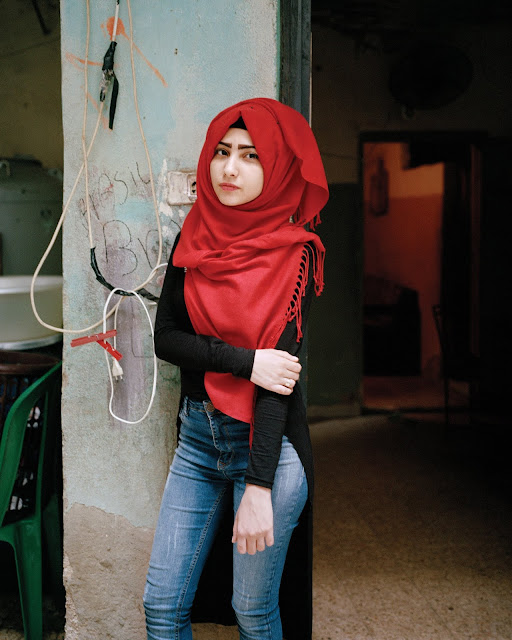 Matar’s warm personality endears her to would-be subjects. She approaches them “literally anywhere,” including once at church on Christmas Eve. In fact, I witnessed her make arrangements for a future shoot with a willing gallery attendant mere minutes before she delivered her talk at the Transformer Station. She estimates that 95 per cent of invitees agree to appear in her photographs. She feels that her success rate is helped by the fact that she is a female photographer who reveals that she is a mother.

Her process is no-frills, without studio lighting or a tripod. Matar, who describes herself as “almost obsessive,” gets right into the action—for example, “climb[ing] all over the bed” when depicting young women in what functions as their private sanctuaries. Matar’s young subjects are often confounded by her use of analog photography (most of the works in the show were shot on film). They’re also prompted to take the photo session more seriously because of not being able to see the results instantly. Matar asks her subjects not to smile, but to look at the camera and express themselves. She monitors the details of the hands, the feet, the eyes, and body language. “The stars align sometimes,” she says. “It’s a matter of seeing it.” Matar uses a medium format camera, and when switching out film after ten shots, she strikes up a conversation. It’s “like pressing the reset button every few minutes,” she says. Expressive and enigmatic portraits follow. 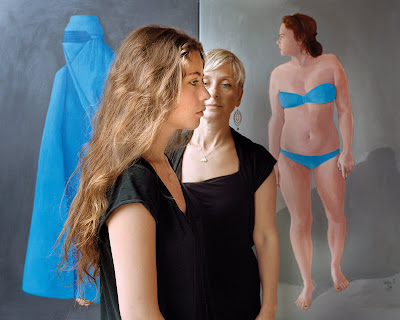 Another semi-autobiographical thread besides cultural self-exploration emerges through Matar capturing the passage of time. Through photographing predominantly females from puberty to middle age, sometimes solo and sometimes in mother-daughter pairings like the haunting Leila and Souraya, Jounieh Bebanon (2015, shown above), Matar says she is “following my [her] own aging in my [her] daughters.” As a mother, she has watched her daughters’ behavior shift in lockstep with bodily changes. She observes that in general, young women eventually express pride in their altered selves but beforehand, there tends to be a phase of “beautiful awkwardness,” a term the artist borrowed from a friend describing Matar’s work. One such example is Lavinia 11 Brookline Massachusetts (2013); the girl tucks a bent leg above and behind herself on the stairs and turns the other foot at a seemingly irreproducible angle. Matar tried to mimic it for the audience but lost her balance. A subsequent portrait shows Lavinia in the same stairwell at age 13, with the earlier photo hanging on the wall in the background. She is still gangly, but what Lois Lowry describes as “awkward ambivalence” (2) is starting to pass, for there is a hint of a smile. 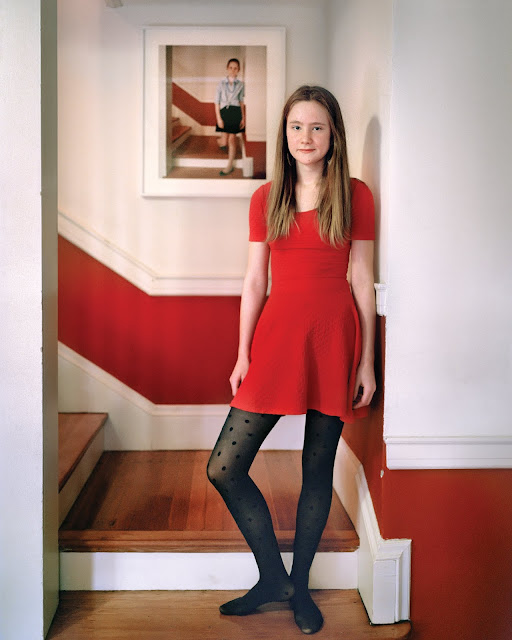 In my own work, which has crossed over into photography on occasion in recent years, I am interested in gender as a social construct, especially the widespread sexualization of young girls in the cultures I know best, the US and Canada. Having observed so many situations where girls don’t have agency, I find Matar’s work refreshing because it’s celebratory and well-intentioned. Evidence of this can be found in the catalog for A Girl and Her Room. The artist statement printed in the catalog describes Matar feeling moved by the girls’ “beauty and strength, the aspirations and dreams…” (3) Moreover, in Susan Minot’s essay in the same catalogue, Matar stated that “…she was struck and humbled by how sweet and vulnerable all the girls were, one after another” and that she attempted to capture “the soul of each girl.” These sentiments contradict the oversimplified reading of her work seen in, for example, online reactions to Yasmine 12, Beirut Lebanon (2012), in which the subject clutches a large, fluffy pillow to her torso—in the process covering her clothing entirely—while flanked by other pillows that feature starlets who might read not just as idols but as competitors. Some interpreted it as a sexualized portrait. In terms of that particular image, Matar points out that protective poses are common at this age. Also, in general, she says that since she isn’t instructing her subjects on how to present themselves, her portraiture retains an element of documentation. By helping young women celebrate their true selves, she feels that she is empowering them. Matar elaborates, “In our society today, we often tend to send mixed messages to girls—they can be who they are, but if they pose a certain way, we then criticize them.” 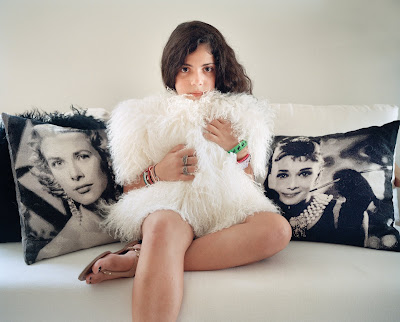 (Quotations are from Matar’s artist talk and from follow-up correspondence by email).