“...we are all de facto experts in textiles...” - Julia Bryan-Wilson

One year ago today, as if enacting a Grey's Anatomy storyline, I was airlifted* under life and limb protocol from a regional hospital to the country's largest trauma centre where a neurosurgeon operated on me at nightfall. Brightening my spirits when I arrived home from the last of three hospitals was a care package from a friend I've known since before kindergarten--long before we both became librarians. Sometimes a friend knows you so well, they can anticipate your needs (bizarre though they may be) in a time of crisis. For me, that something was the thrill of unwrapping a book about the political dimensions of textiles by an author/ art historian I admired already. 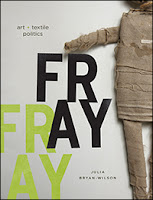 The front cover was, and in some ways still is, relatable to me. Its figure by Chilean artist, Cecilia Vicuña, is made almost entirely of medical bandages. As a car crash victim, I was operated on for a single injury, but what qualified me for entry into a trauma ward was having multiple injuries--ranging from a collapsed lung (which is fatal for one-third of car crash victims) to a concussion made more dizzying by the rotation of helicopter blades, which foretold three months of vertigo every time I got in bed and sometimes at points between. Meanwhile, the psychological definition of trauma hinges on believing you or a loved one may be about to die unexpectedly, which was absolutely the case in my situation. People say I'm an inspiring survivor, but continuing to exist, in my opinion, is not inspiring. For legal reasons, I cannot divulge the arguably heroic element of the experience, which could certainly be inspiring. Initially, that was very challenging and there were moments of feeling like I was unraveling.

I have only gotten around to reading this gift recently because I've minimized the handling of hard cover books to allow myself to heal. Also, I've been prioritizing self-help books with titles like Surviving an Automobile Accident and first-hand accounts (both fictional and autobiographical) of the subject as a means to cope. Rest assured, I'm cognizant that this is my corniest title for a blog post by far, but it's an appreciative shout-out to Laura Wray for sending me Fray (University of Chicago Press, 2017) by Julia Bryan-Wilson.

Although Bryan-Wilson's focus is on case studies in the past half-century, she includes context from the broader history of textiles like: quilts being used to encode escape routes for enslaved people via the Underground Railroad; textile factories being a site of labor organization; and socialist William Morris advocating for the production of well-made goods by hand--all feeding the impulse to read leftist politics into textile work wholesale. As to the time period that is the focus of the book, the reader is exposed to highlights like the establishment of the World Craft Council in 1964 and of the Church of Craft in 2000.

Intersectionality is ever-present in Fray. As Bryan-Wilson challenges binaries like associations of textiles with women rather than men or the split between craft and fine art (with the former seen as inferior), she facilitates a broader understanding of the ubiquitous nature of textiles by drawing attention to contradictory examples and marginalized voices. She is drawn to those who blur boundaries like queer black artist Ramekon O'Arwister, who invites passersby to help make whorls (evocative of sea creatures, in my opinion) in the ongoing participatory performance, Crochet Jam. As a nod to the female family members who taught him to crochet, it is a collaboration of sorts over time in addition to being a present-day collaboration.

Bryan-Wilson observes, "...we are all de facto experts in textiles." Thus, it is appropriate that occasionally, she includes personal anecdotes such as: wearing her mother's t-shirt from the 1970s featuring the text, "Ladies' Sewing Circle and Terrorist Society" with an innocuous-looking floral design; seeing Chilean arpilleras (illegally stitched scenes of political life during the Pinochet era) in a maid's suitcase when she was a student abroad; and writing a friend from high school to ask if she had ever considered contributing a memorial rectangle for her father to the NAMES Project AIDS Memorial Quilt (1987-present). Her wry sense of humor also surfaces here and there, in expressing amazement at the innovatively costumed drag theatrical troupe from San Francisco, the Cockettes, bringing tinsel in their carry-on luggage; in choosing the heading, 'Harmony Hammond Goes Down' to reference the sexual connotations of the lesbian artist's painted rag rug sculptures; and in imagining Freudian language used in a woman-seeking-woman personal ad.

Most of all, what I appreciated about this highly readable book was the visceral nature of Bryan-Wilson's writing--for example, describing cross-stitching as biting into a figure. I am unable to wield a needle at this point in my recovery--pity, because I have commented over the years that I feel most like myself when I sew. Reading Fray gave me that back to a degree as I could picture the manipulation of fabric, which I know is around the corner.

Thank-you to others who sent gifts and flowers, ran errands, visited, called, wrote, etc. as I convalesced. Now, onto year 2 of my recovery...

*When I named this blog, never in my wildest dreams did I imagine medical helicopters making the list of forms of transit about which I would write.
Posted by Heather Saunders at 7:37 PM