The Art of Feminism

Recently, a young black man hopped on Cleveland's #32 bus and bolted to the back. His mother scolded him laughingly, saying, "We fought to sit at the front of the bus! Get up here!" She grumbled, albeit jovially, "Back of the bus..." As he made his way past me to the hard-won front, the woman with his mother referenced Rosa Parks.

This winsome exchange was an antidote to other transit conversations about race that I have experienced here lately. The last black Uber driver I had told me that he looks forward to moving with his daughter to Atlanta because he feels safer there, and he will give up his gun when he relocates. I felt for him and expressed as much. However, I had a hard time relating as a white woman from Canada, where: there is more gun control; there are 31 firearms for every 100 civilians (compared to 89 firearms in the US for every 100 civilians); and the last census found that while firearms were the top form of Canadian homicide, they accounted for fewer than 225 deaths in a one-year period (compared to an annual average of 30,000 firearm-related deaths in the US cited by Amnesty International--granted, there is a difference in population, but with scaling, gun-related deaths in the US are more than 15 times that of Canada). So, I ended up blathering about the World of Coca-Cola museum in Atlanta. I should have spent more time listening but I was nervous because the previous conversation I had had with a black Uber driver about race relations unravelled quickly. That driver launched into condoning racial profiling in multiple criminal contexts even if it leads to offense or fatalities, foregrounding his comments with the revelation--in a protective tone--that he was in a interracial marriage with a white woman. I tried to employ the skills I learned at the Women's Convention two years ago in Detroit to encourage a broader view by acknowledging an opposing viewpoint before gently nudging it. At the same time, I felt conflicted because in a recent workshop at the ACRL conference in Cleveland, attendees were urged to take up less space when in a privileged position. What prompted me to fall silent for the rest of the ride was learning that he was armed at that very moment, which I did not realize at the time is against Uber's policy.

Back to privilege, never have I been more aware of my own in Cleveland than the spring day I found a broken beer bottle in the grass and carried it for about 5 minutes to the public library, where I wrapped it in newspaper before disposing of it in the garbage can. I kept my arm down, to look less threatening. Along the way, two young black men walked past; one exclaimed in shock. The next pedestrian I passed darted out of the way, giving me a wide berth of several feet. To my knowledge, no one reported the incident. Would that have been the case had the bottle been transported by the first men to cross my path (I ask of a city that has not yet reached the five-year anniversary of the fatal shooting of Tamir Rice)? 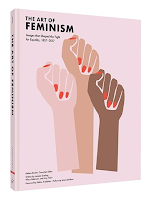 So, why am I sharing these anecdotes, besides the fact that my blog's subtitle mentions transit and libraries? The book I have been reading, which I now highlight in my penultimate post, is The Art of Feminism: Images that Shaped the Fight Against Inequality, 1857-2017 (Chronicle Books, 2018). Its cover features Deva Pardue's 2016 poster with three upraised fists in various skin colors. The website for For All Womankind, the public benefit company founded by Pardue raising funds for not-for-profit organizations, states, "We believe that issues of gender and race cannot be separated." (1) Initially, my impression was that highlighting intersectionality on the cover is a reminder that feminism has come a long way since the first and second wave. However, in the introduction for The Art of Feminism, editor Helena Rickett (chair of the Women's Art Library and senior lecturer in curating at Goldsmiths, U. of London), whom I had the pleasure of meeting back when she was at Toronto's Power Plant, argues that feminism has always been plural and intersectional--though not without its shortcomings.

The book is organized sequentially, giving a sense of how feminism has evolved over the years. It features essays; color and black and white images with easy-to-read didactic texts; an index; and a bibliography organized into three sections that correspond with those of the book. Rickett notes that The Art of Feminism is the first publication to showcase subversive visual expression in the name of feminism from the 19th Century to the present. It begins with a constant back and forth between the US--where the first public discussion was held about feminism in 1848 in Seneca Falls--and England, revealing the mutual influence of their burgeoning suffrage movements; for example, the branded combination of colors in British parade banners was repeated with only slight adjustment by the Americans. Because this pairing of nations dominates the first third of the book, I thought it would be a fitting prelude to me signing off: my final post, which will be the only one outside of North America, will feature an innovative feminist gallery in London, UK.

In The Art of Feminism, works are included by women, men, and non-binary artists like Claude Cahun (1894-1954). From Cahun's captivating self-portrait with a mirror to J. Howard Miller's Rosie the Riveter poster (which, although famous today, had an original print run of only 42 copies), there is a mix of fine art and visual culture. Also included are works on both sides of the feminist movement. Satirical cartoons like a female boater about to be capsized by a wave whose crest is ridden by a boat with a male passenger and a sail that says, 'VOTES,' seem ridiculous now. Personally, I felt a twinge of smugness when I read that these anti-suffrage works are less strong artistically than those of their rivals. The importance of critical acclaim is underscored elsewhere, when the reader is exposed to the impact of exhibitions, such as Kunst Mit Eigen-Sinn. Curated by VALIE EXPORT to unpack "the complexity of art-making within patriarchal culture," it emphasized body-based work and served as a counterpoint to the Venice Biennale that took place shortly beforehand (it also attracted many of its audience members). On the flip side, there are those who work largely outside the gallery system, like the Guerilla Girls with their cheeky exposés of sexism in the art world through posters and the donning of gorilla masks. Parallels of high and low art are touched on in the music world too, such as Beyoncé using mainstream venues like the Super Bowl to bring attention to blackness, condemning police brutality while simultaneously celebrating the importance of family and of cultural contributions by the likes of visual artist Carrie Mae Weems; and Pussy Riot, the anonymous punk band who had three members imprisoned for hooliganism motivated by religious hatred for performing in the Cathedral of Christ the Savior in protest of the Orthodox Church's support of Vladimir Putin. Since The Art of Feminism is billed as being about visual art and not music, it would be helpful to have added that Pussy Riot has been cast as an arts collective. For example, as I've blogged about for Paradigm Shift, the book, Punk Prayer for Freedom (2012, Feminist Press, City U. of New York), notes that one of Pussy Riot's many venues has been an art gallery, and their supporters in that publication use terms like performance art, action art, protest art, art attacks, and sacred art to describe their interventions and even the prosecution framed their intervention as “so-called contemporary art.” At any rate, the example of Pussy Riot taps into the question of how far artists will go, and there are many fascinating examples in The Art of Feminism, from ORLAN who underwent voluntary plastic surgery nine times in the early to mid-90s to emulate ideal beauty in art (cherrypicking elements from the Mona Lisa and Botticelli's Venus), and Tanja Ostojić, who became married and divorced to a German artist she met online to draw attention to modern-day mail order marriages in the late 1990s to escape the former Yugoslavia because of civil wars. Key social movements from the recent past are also included, such as #BlackLivesMatter, represented by the photograph of leshia Evans standing stoically as she is about to be arrested, while protesting the shooting death of Alton Stirling in 2016; and the Women's March in DC in 2017, which prompted a pink pussy hat (the symbol of protestors) to be added to the collection of the Victoria and Albert Museum.

Some overlap exists between the content in this book and the content in my blog--from coverage of Toronto's Feminist Art Gallery to the New York-based second wave feminist publication Heresies to Sutapa Biswas' painting, Housewives with Steak Knives--making me hopeful that I have done feminism justice in this decade-long project.

This post is dedicated to my mother and sister, who dropped everything last spring to be with me in the hospital when I could barely raise a fist in the air. Three are stronger than one. Happy Mother's Day to both of you!