Nud Nob at Gladstone Gallery in Chelsea, New York is British artist Sarah Lucas’ first show in the US in almost ten years. 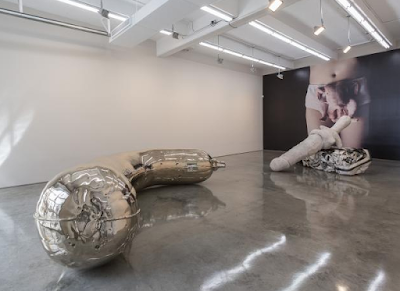 Featuring large sculpted phalluses and phallic-shaped vegetables as well as sexually suggestive photographs, the exhibition provoked extensive gawking through the gallery’s glass doors when I was there. Of the people who entered the gallery proper, the least flummoxed was a girl around age six. Her only concern was that she wanted clarification about what the woman in the six massive self-portraits wallpapering a room was eating (answer: a banana). Also overheard was a man repeating, “It’s beautiful” when looking at an oversized phallic sculpture. In spite of the well established concept of penis envy, personally, I found myself thinking of the entry tags at the 1993 Whitney Biennial that said, “I can’t imagine ever wanting to be white.” When contemplating why she chooses this subject matter, Lucas says, “because I don’t have one” but cites plenty of other reasons that invite diverse interpretations of her work: “appropriation…voodoo economics; totemism; they’re a convenient size for the lap; fetishism; compact power; Dad; why make the whole bloke?; gents; gnomey; because you don’t see them on display much; for religious reasons having to do with the spark” (Coles, p. 51).

Lucas’ work is blunt, in keeping with the way she speaks. It’s gruff but poetic. As J. J. Charlesworth writes of her work from the 1990s (which includes said banana works as well as Chicken Knickers, the photo in full view from West 24th Street that superimposes a raw chicken on a woman’s panty-covered crotch), its sophistication lies in its vulgarity. Blush and turn away, though, and you might miss it.

One of the nuances is the evidence of the artist’s hand, and I don’t mean that in a Sarah Lucas-double entendre kind of way. Rather, the artist’s hand is revealed through asymmetrical forms and pockmarked surfaces that make for imperfect phalluses. Displayed on cubes of crushed metal cars, there’s a bit of a thumbing of the nose at machismo. Also, the evidence of labour differentiates Lucas’ sculpture from, say, minimalist sculpture (which was also very macho) and emphasizes the kind of labour that isn’t automatically associated with art made by a woman.

What you can’t miss, even if you stick to the street view, is the size of the works. It seems proportional to the cultural value assigned to sex and functions as a reference to the notion that bigger is better—an absurd ode to penis enlargers, breast augmentation, and big numbers notched on bedposts. There’s an element of playful pop mockery with the scale quoting Jeff Koons and Claes Oldenburg, but there’s a sinister quality too: if you’ve seen the movie, A Clockwork Orange, it’s unlikely you’ve forgotten a large white phallic sculpture used in a lethal rape scene of a woman.

There are smaller works as well that Lucas showed in the Venice Biennale last year. The Nuds series began as stuffed nylon stockings that stand in for human figures but look kind of like Gumby. Sometimes they appear with chairs, sometimes with toilets. Sometimes they are breasts, sometimes legs, sometimes intestines. The later versions in the show are bronze, like the large vegetables (which might be eggplant, zucchini, or butternut squash; whatever they are, they bring to mind urban myths of self-pleasure leading to hospital visits). The shift to bronze gives them a refined quality that announces, “I am Sculpture.”

As a Young British Artist who is not really so young anymore, being in her 50s, and somewhat androgynous in appearance, Lucas is well positioned to make audiences rethink the conventions of sexual desire by disrupting the privileged male gaze that has dominated art history. You might say she’s carrying the torch for the late Louise Bourgeois. Even so, the extent of the feminist dialogue she encourages has been debated. As a librarian, I have noticed that some of her articles are indexed only with ‘feminist art’ while many are indexed with practically everything but that. Her work has also been called ‘trash-feminism’. Although I have yet to encounter this term as a noun, I assume it to refer to artists like VALIE EXPORT, who entered a Munich movie theatre in 1968 wearing crotchless pants and taunting audience members. Lucas, in turn, has cut a hole in her shirt to expose her nipple in response to Marcel Duchamp’s
catalogue cover of 1941 and she has certainly used base materials to comment on sexuality in the past, like tabloid publications, cigarette buts, and old mattresses. Regardless of whether she’s a feminist, I feel an affinity with her because of her stance that we construct our reality and therefore, we should reflect on that process.