A former gallery colleague once told me that meeting her husband (of several decades and counting) felt like stepping into a warm bath. For me, that characterizes the initial and continued experience of viewing the works of Cairo-born, New York-based Ghada Amer. Years from now, I imagine it will still feel just right.

Her current exhibition of recent work at Cheim &Read (Chelsea, NYC), Rainbow Girls, closes on Saturday. It's well-rounded, featuring three floor sculptures (a new enterprise for Amer) and eight two-dimensional mixed media pieces in which thread is dominant. Since 1997, she has combined paint, which she considers to be male, with thread, which she considers to be female. Two of the eight works were made with her partner and long-time collaborator, Reza Farkhondeh, as denoted by the initialism, RFGA, in the works' titles. The Big Black Bang -- RFGA, (2013) is the largest work in the show. At 102 by 132 inches, it is a seeming response to connections drawn between Amer and Jackson Pollock. The size for Abstract Expressionist artists like Pollock was all about capturing the action of the body, but sewing is different. Occasionally, it requires a full range of motion, but often, it's a matter of teeny stitches for nimble fingers--no bravado there. This piece pulses with colour on a dark background, a tamed tangle of sperm-like threads flowing in the same direction and visually overtaking images of stitched, sexualized women underneath, to the extent that initially it appears wholly abstract. At the risk of flogging the Pollock comparison, I will say this: just as attempts to mimic his fractal-filled paintings have been likened to a plate of spaghetti, when I run out of Ziploc bags, my embroidery bag is a mess but has none of the spectacular qualities of this work. 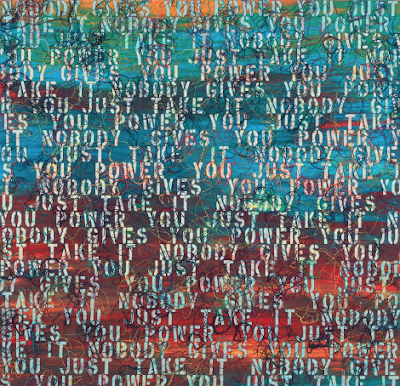 Amer is an interesting counterpoint to the last artist whose work I reviewed, Sarah Lucas, because she is understated in comparison. In fact, in the catalogue for Rainbow Girls, Anne Creissels comments on Amer's ability to hide as much as she shares. A case in point is the egg-shaped, stainless steel filigree sculpture, Blue Bra Girls (2012), in which a female figure's thumbs meet in the negative space understood to be her groin. It seemed fitting that I was distracted by a boy dragging his skateboard around this piece (seemingly indifferent to its connotations of masturbation) or that kids were playing hide and seek around another sculpture, because there is a constant element of distraction in Amer's work. With the sculptures, you can't take in the information on the surface immediately facing you without filtering the information (presented backwards) on the opposite side of the sculpture. Similarly, distraction is inevitable in her two-dimensional works, which are a combination of overlaid threads, sexualized images, and feminist messages in Arabic and Roman letters. You cannot rest your gaze on the nipple thrust upward of a reclining female without also processing the text that says repeatedly, "I see my body as an instrument rather than an ornament." Whether this is a mantra or an unheard plea is up for debate.

Sometimes the text is in block letters coloured in solidly in black or white paint, bold like Barbara Kruger's advertising-inspired photo montages. Sometimes they seem almost noncommittal, like sketches, traces, or perforations. Their repetition, however, shows absolute commitment. It's orderly, not frantic, so it harks back to a time of sewing samplers and a preference for rote learning over critical thinking. There's another association I can't shake, undoubtedly because of the title. In elementary school, I was one of three girls to fill lined notebooks with rainbow colour schemes, declaring our adoration through repeated text for TV stars, musicians, or the boy next door. Why the celebration of schoolgirl crushes necessitated this behaviour, I have no idea, but I remember it feeling most purposeful. Even though I can't help but see Amer's strands of thread in portraits as tear-smeared mascara, even though I'm cognizant that the least optimistic phrases she uses like, "No woman can call herself free who does not control her own body" resonate in Canada where I'm writing from, I choose to see these works--with their personalized, Jenny Holzer-like truisms and quotations of the likes of Simone de Beauvoir and Amina Sboui--as celebratory.