“My beat is about visual politics”—Zanele Muholi 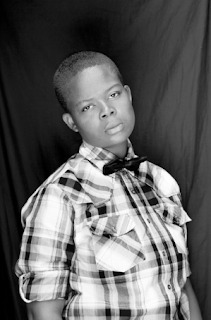 Since graduating from Ryerson University in 2009 with an MFA in Documentary Media, South African artist Zanele Muholi has exhibited in such high profiles venues as dOCUMENTA and the Venice Biennale. During a return visit from Johannesburg for the opening of her show, Faces and Phases (May 1-June 1 and June 18-Aug. 24, University Gallery), she gave an artist talk last night at Ryerson.

When Muholi clarified that she would be giving an artist talk rather than a lecture, she wasn’t kidding. With thank-yous to myriad individuals interspersed between reflective statements about her work at both the beginning and end of the night, a Q & A in the middle, and a seemingly spontaneous demo of website images toward the end, the audience got a sense of her creative process. Evidently, she makes constant, rapid-fire connections between elements in what unfolds as a constellation. Interestingly, although it would appear that she is not a linear thinker (she admitted to never having had things in order as a student either), her black and white portraiture series of black lesbian women is sequential. Consisting of over 240 images taken during the past eight years, it has far surpassed her original goal of 25. One of these works is a self-portrait, underscoring the fact that she speaks as an insider.

To return to the constellation metaphor, during her animated presentation, I found myself thinking back to an excerpt from a book I skimmed on the road trip from North Bay to Toronto. In Art History in the Wake of the Global Turn (Clark Institute in the Visual Arts, 2014), the Raqs Media Collective writes, “Detach yourself, momentarily, from the mothership of art history. Step out for a spacewalk” (p. 4). Muholi invites us to take a spacewalk with her extensive intervention in visual culture. Referring to queer people, she observed, “It’s always challenging to have people like us. You go to museums and galleries and ask yourself, ‘Where am I in all this commotion?’” Later she noted, “Maybe there’s an assumption that galleries and museums aren’t for black people.” Thus, she aims to bring about or enhance black queer visibility. It’s a pressing need: a few weeks ago, a show featuring her art in the Dak’Art Biennale in Senegal was shut down because of pressure from Islamic extremists. Consequently, “being here is like winning the Nobel Prize.” She notes that “these [institutional] spaces sidelined us and we decided to become visible.”

She has facilitated this visibility through portraiture. Muholi introduced herself as a proud black lesbian, and she photographs other proud black lesbians in Faces and Phases. She avoids photographing black lesbians under the age of majority or those who haven’t come out. “I don’t want to be responsible for your closet,” she says. She has formed an organization, Inkyaniso, for the subjects—or ‘participants’ as she calls them, acknowledging the collaborative element—to share their stories (see http://inkanyiso.org).

“My beat is about visual politics” she says and considers her work to be more about visual activism than aesthetics, and herself to be a visual activist more so than an artist. Indicative of this stance is her statement that she doesn’t want to die young without rewriting history.

Rather than fall back on jargon like ‘the scopophilic gaze,’ she states that the series forces the audience to ask why they are asked to look at these faces at this point in history. South Africa is at a turning point historically. In 2006, same-sex marriage was legalized, and it is the first (and so far only) African country to make the transition. Muholi has photographed gay weddings, making arrangements like not charging for her services in exchange for being able to use selected images professionally. “It’s part of our history. It’s now,” she says. She has also documented lesbian funerals as a political act to expose queercide. 2012 was a particularly brutal year in this regard, with Amnesty International citing at least seven LGBTI murder victims across South Africa*.

Photographing the participants in Faces and Phases has been painful for Muholi, though it may not be apparent from the confidence the participants project. When an audience member asked about her editing process, she revealed that it usually involves tears and a trans-Atlantic call to her therapist. Still, Muholi says, “I decided I would rather suffer for something I believe in than die in silence.” Her work is rooted in love as much as it is in pain. She says that she doesn’t want to limit the struggle to pain because it can’t be moved forward without love. “When we think about black lesbian histories,” she urges, “let’s think about love.”

Faces and Phases, curated by Dr. Gaëlle Morel, is part of WorldPride 2014. If you’re in Toronto, please join me at the opening of The Sex Offensive: Emancipating Gender tomorrow night at the Propeller Centre for the Visual Arts, which is also part of the festival.