In Defense of Yoko Ono 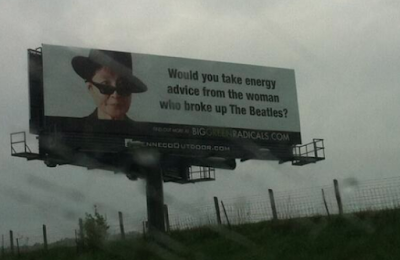 Leaving the North Midway Travel Plaza in Bedford, Pennsylvania on the week-end, I spotted this billboard featuring Yoko Ono. It paired a recent portrait of her with an outdated charge in the form of the question, “Would you take energy advice from the woman who broke up the Beatles?” It was produced by the Big Green Radicals, a watchdog group that critiques the likes of Greenpeace and the Sierra Club. According to the BGR website, the campaign (which also includes similar billboards of Robert Redford and Lady Gaga) aims to emphasize the gap between the lifestyles of average Americans and celebrities. 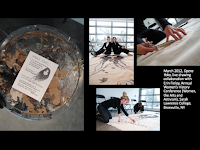 My gut reaction was, “Yeah, probably” in response to the billboard’s question. Before I elaborate, I should say that I can't feign neutrality where Ono is involved, as I did a live drawing performance honouring her at her alma mater, Sarah Lawrence College, with Erin Finley two years ago, as shown on the left. (Double click to enlarge).

When I think of Ono and environmentalism, what comes to mind is Acorn Piece, a collaboration with John Lennon in 1969 that she repeated solo 40 years later. They planted acorns in easternly and westernly directions to symbolize the union of cultures, and mailed acorns to world leaders, asking them to plant them for world peace. At worst, this gesture would result in the absorption of carbon dioxide through the planting of trees; at best, people would come away inspired. Maybe, just maybe, if we had heeded her advice in Grapefruit (1964) to “Listen to the sound of the earth turning” (1) the earth wouldn’t be in such poor shape.

The billboard is a response to Ono’s anti-fracking efforts with a group she co-founded with her son, Sean Lennon, called Artists Against Fracking. Its placement in Pennsylvania is fitting, given that more natural gas is produced there than any other state on the prime Marcellus Shale stratum. Stephanie Malin interviewed small-scale farmers in Pennsylvania who were in a position to lease land for corporate fracking, and reported that they saw it as a force beyond their control. Additionally, she found that they either felt the environmental concerns were unfounded or that they were balanced by economic benefits. This type of media campaign could play a key role in normalizing fracking for a group that is vulnerable. (2)

Whether or not Ono had a hand in the demise of one of the greatest bands in history is a separate issue from her environmental politics. She is not Pete Seeger, nor is she Midnight Oil. The pairing is simply incongruous. Curiously, the BGR billboard says “broke up the Beatles,” which sounds definitive, yet in Ono’s activist profile on the BGR site (3) it says, “When she’s not helping to break up the Beatles…”. So, which one is it, BGR? If Ono said fracking causes earthquakes in one breath, and helps cause earthquakes in the next, undoubtedly she’d be attacked for being inconsistent.

Ono is no stranger to poor reception: for example, in her native Japan, her shows have been advertised using the script reserved for foreign names, while her grasp of English has been mocked in the US, where she is based. (4) The BGR profile of Ono dismisses her experimental music as screeching and as (note the surly quotation marks) ‘performance.’ It also describes her as being washed up. It’s unfortunate to see the recipient of a lifetime achievement award from the high profile Venice Biennale so grossly misrepresented. On a more superficial note, when Vogue publishes a spread of a woman’s “amazing style history” as it did with Ono (5), it means she is definitely not a SWUG.

Fortunately, it would seem that Ono has the last laugh. In attacking Ono with billboards, the Big Green Radicals are actually reinforcing her media savvy. Ono used billboards most famously with John Lennon to protest the Vietnam War, the contemporary version of which is “Imagine there’s no fracking” billboards produced by Artists Against Fracking. If imitation is the sincerest form of flattery, Ono should feel vindicated. Her “brilliant use of mass media” (6) is evident not just in her billboards but in her banners, bags, stickers, postcards, flyers, postcards, and badges, all carrying on the tradition of multiples that emerged with Fluxus and made art more accessible to the 99%.