“Its [the SCUM Manifesto’s] premise was that...women should take over the world.” 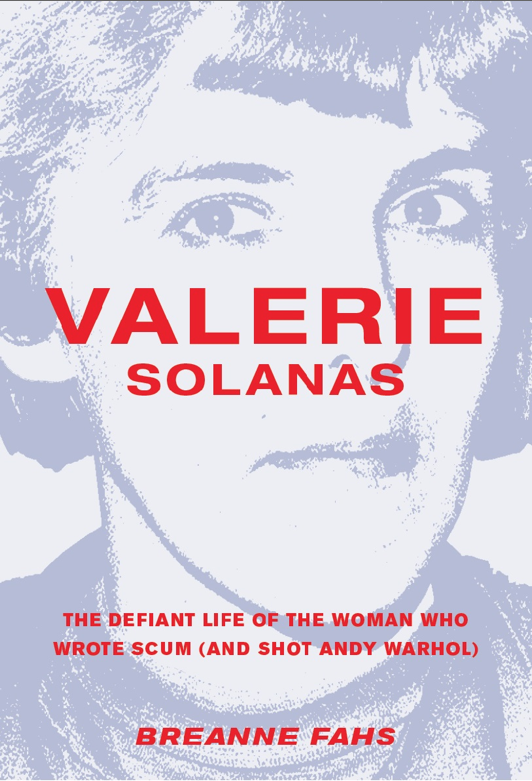 Breanne Fahs’ biography of enigmatic, self-described superfeminist, Valerie Solanas (1936-1988) lives up to its gripping preface. The opening paragraph of the book published in April by the Feminist Press at the City University of New York reveals that one interviewee refused to speak about the woman who famously shot Andy Warhol until her death certificate was produced, for fear of retribution from the paranoid schizophrenic. Between reluctant interviewees and a loyal mother who burned Solanas’ archival material when she died, the very existence of Valerie Solanas: The Defiant Life of the Woman Who Wrote SCUM (And Shot Andy Warhol) is remarkable.

Exhaustively researched, the book is chock full of quotations whose length prevents statements from being taken out of context. Although this risk is always mitigated by conscientious academics, it is also something of a tribute to Solanas, who became incensed whenever she felt her writing had been misrepresented. With extensive research comes detail, but it may not always add to the tale. For instance, it seems superfluous that the couch an arts editor crossed over to in the Factory right before the shooting was in the art deco style. Ditto for Warhol’s wardrobe selection that day, though it is interesting that he was wearing his trademark silver wig when he was taken to hospital. Fahs’ writing style is also descriptive grammatically; a sentence comes to mind that contains seven adjectives in a row (1). It’s fitting, though, because Solanas was such a complex person that one adjective would not suffice to describe her. Plus, it mimics Solanas’ style; for example, Solanas wrote that fatherhood made females “male-dependent, passive, domestic, animalistic, nice, insecure, approval and security seekers, cowardly, humble, ‘respectful’ of authorities and men, closed, not fully responsive, half dead, trivial, dull, conventional, flattened out and thoroughly contemptible” (2).

That Solanas’ shooting of Warhol appears in parentheses in the title underscores the author’s intention to not dwell on this aspect of her life. Indeed, the near-fatal shooting of 1968 appears just before the half-way point in the book. As a result, extensive consideration is given to her contributions—welcome or not—to radical feminism from behind bars and how she fractured NOW (its members couldn’t agree on whether to support her as a mistreated and justifiably angry woman or distance themselves from her violence). There is a sense of restoring dignity to Solanas, indicative in sensitive comments like Fahs qualifying the behavior of an acquaintance of Solanas as deliberately cruel. Additionally, while it would be handy to have a timeline of her extensive criminal record, it would be at the cost of empathy because the facts would be presented apart from the context that helps the reader understand her plight.

For Solanas, writing became an outlet for her contemplation of gender, although ‘contemplation’ seems too gentle a term. She had a complicated life to say the least: she was an apparent child victim of incest betrayed by her father, a twice pregnant teenager, an adult sex worker in seedy settings like the Chelsea Hotel rooftop, and a green card wife. She embodied the ‘whatever’ quality of queerness that Sarah Liss writes about in last month’s issue of FLARE magazine (3), referring to herself as a lesbian, but choosing occasional male partners, at one point for a few years. At times she projected asexuality, but she could also be overtly sexual—for example, in exposing herself. This ambivalence came through in her manifesto for SCUM, the Society for Cutting Up Men. Its premise was that men were emotionally flawed and overall screw-ups, so they should be exterminated and women should take over the world. Although the scope of the book is within Solanas’ lifetime, the ripple effect is apparent in contemporary society—for example, in Pussy Riot singing, “Kill the Sexist!” and a Carrier of the Cross for the Orthodox church in which they performed a different song retorting, “If they want to live in a world without men, they should move to an island or the Amazon or something” (4).

Because Solanas spent time in mental institutions (more so than in jail), it has been documented that she had a higher than average IQ. Her radical ideas were intertwined with incredible insight. For instance, she predicted such developments as test tube babies and Viagra. She was a master wordsmith and a perfectionist editor. She demanded respect, but was hardly respectful of her colleagues (for example, comparing Simone de Beauvoir’s writing to comic books and calling the works of Ti-Grace Atkinson, her ally when she was incarcerated, “total shit” (5)). In contrast, Solanas considered the SCUM Manifesto to be “history’s greatest bargain” (6). In part, this was in reference to the fact that its initial sale price was $2 for men and $1 for women. French philosopher, Jacques Derrida declared the text ‘necessary’ while Atkinson called it the “most important statement written to date in the English language” (7).

Broadly speaking, it’s possible that for Solanas, Warhol represented the gender disparity of the art world. Before she met him, she lamented in the manifesto that men “define Great Art” (8). She saw her shooting of Warhol as a moral act that was about artists’ rights (namely writers’ rights) rather than about feminism, which complicated matters for the radical feminist movement. Specifically, she was upset because she felt Warhol had led her on about producing her play, Up Your Ass, and that he had appropriated her comments for his films—which she had reason to believe, since he welcomed a spontaneous cameo of Solanas in one of his films. Both situations must have felt like a blow since she had believed Warhol to be on her side, to the extent that she considered him to be head of the ‘men’s auxiliary’ of SCUM. Even after the shooting, she maintained contact with him, almost always baiting him. For instance when the original publisher of the manifesto, Olympia Press, went bankrupt and the publishing rights reverted to her, she posted an ad looking for distributors; in it, she wrote, “Andy Warhol, peddle it at all those hot shit parties you go to (9).” The challenge for the reader is that Solanas restated her feelings about Warhol and her contact at Olympia Press ad nauseam and there is a point at which reading her harassing letters and verbal slurs loses appeal. This element notwithstanding, Valerie Solanas: The Defiant Life of the Woman Who Wrote SCUM (And Shot Andy Warhol) will be equally valuable as beach reading and as a scholarly source.

In a visit to the Andy Warhol Museum a week and a half ago, I was glad to see that this book was sold in the gift shop, since the timeline from his life posted on the gallery walls didn’t delve into Solanas’ motive.