Prettying up Feminism: The Coven at La Centrale Galerie Powerhouse

“…the ironic mimicry of girlhood…” 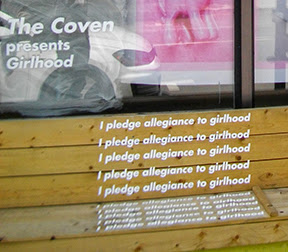 I stopped by La Centrale Galerie Powerhouse in Montreal on Friday night for the opening of the window installation, Girlhood, curated by Luna e los Santos. On the heels of SlutWalk and its strategy of reclaiming what is deemed negative, it aims to celebrate the state and/or attributes of being young and female in spite of girlhood’s bad rap. Girlhood features the work of 13 artists, more than half of them Montreal-based, from a 14-member feminist collective known as The Coven. A fabric hanging of digital reproductions of members’ work faces the street; a wooden bench is partly covered with repeated white text from Samantha Conlon that says, “I pledge allegiance to girlhood”; and on the windowpane, a variation of the white text proclaims multiple allegiances. The arrangement of images is a nod to the Pinterest generation (which seems appropriate, given that the artists who have provided their ages in their bios are in their early- to mid-twenties).

During the opening, a different selection of images than is shown in the vitrine rotated on a projector inside the exhibition space. As with the fabric hanging and also the press release, no titles were included for individual works even though titles can be found for some of the same images on the collective’s Tumblr site. It’s a shame because titles could have provided an entry point for viewers. Just as titles are not associated with individual works in the fabric hanging, press release or slideshow, artists’ names are disconnected in all three. On the one hand, this curatorial choice captures a communal sensibility and refutes the notion of artistic genius, which has historically been associated with men rather than women. On the other hand, attribution in the visual arts was hard won and since lack of recognition for female artists has been an ongoing challenge, it gave me pause. 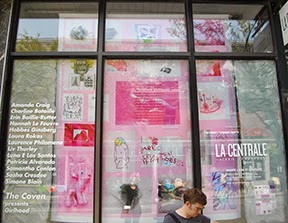 There is definitely room for improvement in the presentation of the images in the vitrine. One of the images towards the top contains graphs which cannot be read from the sidewalk, nor can the graphs be deciphered in the corresponding thumbnail on the invitation posted in the lower right-hand corner of the window (which, oddly, is surrounded by what looks like white, soapy strokes). The window frame bisects a number of images, while valuable real estate is taken up by utilitarian pink borders between images. 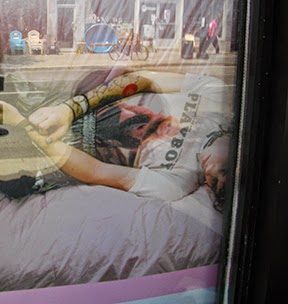 One piece says, “Things 2 make me better than u,” reminding me of an elementary school classmate’s brazen t-shirt that proclaimed, “Everything boys can do girls can do better” (awesomely foretelling her coming out as a lesbian years later). I digress. The work in question is fragmented vertically on the fabric hanging and horizontally on the invitation. The punchiness of some images is sacrificed to the structure of the window; for example, part of a sword is covered, making it seem less threatening. Also, in a clever and progressive gender-bending image of a girl wearing a Playboy shirt, the shock of fuchsia hair on a goth girl is obscured (shown here), preventing the appreciation of its contrast with the blonde hair of the magazine model.

The emergence of collectives like the Coven, and other groups I’ve blogged about such as the New York-based tART and the international Ardorous, is exciting. One collaboration in particular stands out as being parallel and that is the Toronto-based GalGalz. The duo of female gallerists writes, “…our Girlie feminism is an imperfect, personal response to our experiences, and it feels powerful to us. By seeking strength and community in girlieness, we feel that we’re reclaiming what’s relentlessly cast as weak, silly, dismissible and frivolous…” (1) Like the Coven, GalGalz employ pink branding. The colour palette and the frills that accompany it are non-threatening, but are they also inadvertently dismissive, like campaigns against breast cancer? They pretty up feminism, but there’s no escaping the fact that the issues tackled by feminism are ugly. To return to the window text about allegiances, the first one says, “I pledge allegiance to sexting”; personally, when I read that, my mind goes to the late Rehtaeh Parsons (a victim of rape and related bullying), and I feel the opposite of celebratory. Additionally, the risk (or thrill) of adopting a girlie aesthetic for feminist purposes is that it’s hard to tell the difference between the ironic mimicry of girlhood and the hearts and smiley faces that adorn the placards held by young women online to denounce feminism. Thus, having a clear agenda is helpful—albeit challenging for artists with different practices coming together. The press release reveals a bit about their agenda, but it is not as developed as the GalGalz’ online statement. 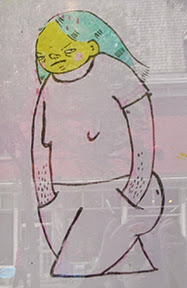 Although the press release states that the artists embrace the frills of girlhood, aside from a silkscreened image of a candy heart, a painting of a jeweled crown, and a photographic image of a My Little Pony toy presumably embedded in icing, the subject matter in the fabric hanging is adult. Images of little girls are not conjured by pins projecting out of underwear to mimic pubic hair; well-endowed female figures dancing in a circle; female figures with hairy appendages and droopy breasts (the latter by Charlene Bataille, shown here, are particularly strong); or representations of Playboy.

The press release notes that the collective exists for the members to find their voice(s), but these unresolved elements effectively convey the very criticism the Coven has identified as being associated with young girls—specifically, to translate from the French statement, that they aren’t sure of themselves. However, their exhibition record demonstrates momentum and it will be interesting to see what they accomplish as they move through the growing pains.