Too Smart for Her Own Good: The Blazing World


“...she would reveal the truth, so people would be forced to admit that female artists are overlooked.” 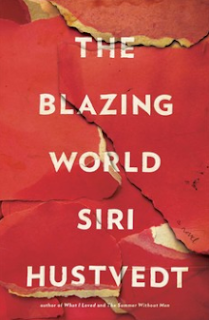 Siri Hustvedt’s The Blazing World (2014, Simon & Schuster) is a fitting follow-up to the last book I reviewed, Valerie Solanas: The Defiant Life of the Woman who Wrote SCUM (and Shot Andy Warhol). Like Solanas, the protagonist in The Blazing World, Harriet Burden—who goes by Harry—is a gender-bending provocateur, hell-bent on getting revenge in the New York art world for misattribution of intellectual property but plagued by judgments about her mental state (and, in turn, credibility).

Hustvedt’s novel is a faux-biography, presented as if edited by one I. V. Hess, Professor of Aesthetics, and published on the heels of a posthumous retrospective show of Burden’s art. A work of metafiction, it’s about society’s gullibility and specifically, its inability to see through fiction. It’s convincing as a scholarly biography, between its analysis of the idiosyncrasies of Burden’s journal entries; a postscript commenting on a vital journal of Burden’s that was recovered as the book was about to go to print; and lengthy footnotes revealing the rabbit holes into which academics leap to track obscure leads…so convincing, in fact, that I actually checked the call number to confirm it as a work of literature. Hilariously, Hustvedt writes herself into the text: in a pseudonymously written article outing Burden’s experiment of having three men exhibit her work as their own to expose gender bias, Hustvedt is dismissed as “an obscure novelist and essayist” (p. 255).

After years of being in the shadow of her gallerist husband, the widow Burden convinces Anton Tish (in 1998), Phineas Q. Eldridge (in 2002), and Rune (in 2003) to participate in the ruse, known collectively as Maskings. All three men had enjoyed varying degrees of success in the art world, so logically, their new, fabulous work made discreetly by multi-media artist Burden will not appear utterly out of the blue. Oddly, their success should be her success, but ultimately, it constitutes her failure. For instance, when one of the artists is fawned over by the press, critics neglect to identify Burden as an influence. She has enough of a reputation as an artist that it is an oversight, but not such an established reputation that it precludes her pursuit of the scam altogether. She can hardly wait for the moment when she will reveal the truth, so people will be forced to admit that female artists are overlooked. Alas, Rune goes rogue and refuses to take part in the exposé. He notes flippantly in an interview, “We live in a post-feminist age of gender freedom, transsexuality. Who cares which is which? There are lots of women in art now. Where is the battle?” Easier said from his position than Burden’s.

Burden’s welfare suffers substantially as a result of the botched experiment: she loses weight, temporarily loses the new love of her life, and instigates a physical altercation with her nemesis. Her motivation had been multifaceted, making the betrayal that much harder to take: in addition to wanting visibility, she had wanted validation—not just as a visual artist, but arguably as a writer and as a self-made philosopher. Her best friend, Rachel, describes her as having “an immense appetite for ingesting as much learning as she possibly could” (p. 48), while Eldridge says of Burden, “She knew too much, had read too much” (p. 216). Undeniably learned, Burden frequently quotes the greats from history in her journals, requiring the editor to act as an interpreter by way of inserting footnotes. The footnotes, being objective by their very nature, contrast Burden’s impassioned writing. Perhaps Hustvedt is conducting an experiment of her own, to gauge the reader’s self-importance: if you recognize an obscure art reference or a historical feminist reference within The Blazing World, how does it make you feel? Knowledgeable? Knowledgeable and therefore superior?

The highs and lows of Burden’s burdensome experiment unfold through chapters presented as contributions written in memoriam by characters interspersed with journal excerpts. In these seeming primary sources, the characters veer off topic to share loosely related details about their pets or people’s auras, emphasizing their lack of investment in the experiment. In contrast, Harry is obsessive, bringing to mind the female-associated term, hysteria. There are some obvious foils, like Rachel, the psychotherapist best friend who identifies Burden’s post-betrayal behavior as irrational; Bruno, Burden’s new male love interest, who is as unmotivated as she is prolific; and even her granddaughter’s friend, who is able to forget a spat the very next day.

There is poetic justice when the traitorous artist, Rune, dies during his own performance. As a result, there are posthumous accounts of his life and legacy and a surge of interest in his practice. Frustratingly, even in death, Rune and Burden compete for attention. On the upside, reading his sister’s remembrance humanizes him and creates empathy, leaving the reader conflicted about whether or not to detest him.

In addition to astutely capturing the complexity of the gender bias in the contemporary art world, Hustvedt characterizes it well overall, from graduate students’ overuse of theory to punchy descriptions like critic Clement Greenberg, right-hand man of Jackson Pollock as “a successful dictator” (p. 172). That Hustvedt holds a PhD in English and has lectured on art in academic and museum settings comes as no surprise. In the running for the Man Booker Prize, The Blazing World is deserving of a place on every academic and art lover’s bookshelf.

Cover reproduced with the permission of Simon & Schuster.
Posted by Heather Saunders at 7:37 AM