Back to School with Sarah Beck


“There’s a beautiful balance between science and art that’s waiting to be tapped.”
I caught up with Sarah Beck by phone after her return from Montreal as the first artist-in-residence at the International Space University’s Space Studies Program (SSP14), which is in its 27th year. 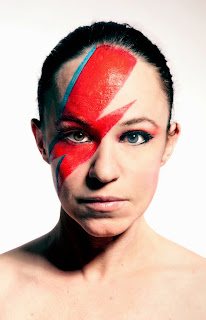 HS: If I understand correctly, your starting point of the Pioneer Plaque (1972) was the first visual initiative to communicate to aliens. Can you tell me more about it?
SB: Carl Sagan was approached by NASA at the last minute. His wife actually drew it [the design that would become an etching]. It contained a pulsar map, which is like a time capsule; if someone found it, they could tell when it left our solar system. She compressed all body types and ethnicities for the nude figures, and she was heavily criticized because the man was waving and the woman wasn’t.
HS: What was at the heart of the controversy?
SB: He was waving. He was dominant. Also, she was relatively thin. As a pair, they were controversial because they were obviously Caucasian, even though she tried to make the figures cross-racial.
HS: I remember reading that in one of the Voyager missions, images of sex organs and a slightly pregnant woman didn’t make the cut. Do you think we’ve become more or less prudish with the images we’d use to communicate with aliens?
SB: Well, the seventies were pretty swinging! The unfortunate thing is that the Sagans were so obsessed with biology that they overlooked culture. In their defense, with anything that involves tax dollars there’s going to be controversy and it’s going to be seen as ‘space smut.’
HS: What other tactics were used in that time in anticipation of alien contact?
SB: Frank Drake was already sending radio signals into space, then paired up with the Sagans and others to create the ‘Murmurs from Earth’ project. They sent a gold record into space with a uranium spot on it; it’s a way to time stamp because it allows for dating. They wanted to capture sounds of the earth: dolphin sounds, babies crying, even Chuck Berry. There’s a Saturday Night Live skit with aliens asking for more Chuck Berry! They wanted to get people to say hello in every language on the record, so they went to the UN because that seemed the most expedient way. But some countries refused to participate if their enemies participated, or if their favorite songs from home were not included. Some went on to record long-winded speeches, and the whole exercise ended in a bit of a SNAFU. Notably, no ‘Rosetta Stone’ was included, so I suppose there would be no way to decode what was being said in so many languages anyhow. Ultimately this aspect of the recording is definitely a time capsule of earth, and our inability to communicate amongst ourselves...then or now!
The record also makes several cognitive assumptions, first assuming that aliens have ears, and the plaque and operational diagrams assume aliens have eyes. They also assume that if these devices make it through, space aliens even recognize the record as a message and not part of the space probe’s mechanics. Lord knows if I came across the diagram I likely couldn’t operate it myself. Although it has now left our solar system all these years later, the odds of it being intercepted are slim. So it’s more for humans.
HS: What was involved in your re-imagining of the Pioneer Plaque?
SB: The first thing I did was read. Scientists were fascinated to learn that art involves research. 40 years of research seemed manageable to digest at first. I wanted to understand the conversation and identify the key players. During the course of my research, two stories blew my mind: one pointed out that there are two forms of intelligent life on earth—humans and dolphins—yet we have no idea how to communicate with each other. The other story was about two groups of researchers who spent a year devising messages for aliens. When they sent them to each other, one group couldn’t decode the message because they were working with Macs and their counterparts were working with Windows!
The punchline of anything you read is that it’s [alien contact is] not possible. In fact, we may be alone in the universe, which I find as equally terrifying as being one of many intelligent life forms in the universe! Stephen Hawking doesn’t think we should try to contact aliens. He says it’s dangerous. What if alien races are hostile or want our resources? On the other hand, there’s an art critic named Hito Steyerl who says that our messages are already out there, and if aliens are going to get a message, it’s probably going to be one our spam emails about penis enlargements.
HS: Meaning that we need to be more strategic or conscientious about our messages?
SB: Maybe. Carl Sagan pointed out that if aliens are listening to our ‘babble bubble,’ assuming they exist, it’s too late and we might as well be friendly. 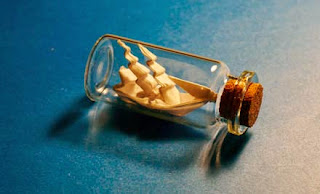 I knew I wouldn’t be drawing a new plaque, and wasn’t even sure there was a point to my project. Then I started thinking, what is the ultimate message in a bottle? Space is often compared to the ocean. The odds of a message being scooped out of the vastness of space had me picturing a bottle bobbing along sea waters, waiting for an audience. It’s such an optimistic act to send out a message in a bottle, like a needle in the biggest haystack you can imagine! Using the message in a bottle, the medium itself addresses the hopelessness of interception while it embraces the hopefulness of being found.
I also decided my message needed to be simple, and meant more for my audience on earth. For the alien who intercepts it, the message is ‘you are not alone!’ They may think the object is magic, and in fact, that seems just about right.
As humans, we often ascribe magic to what we do not understand. An important player in the conversation about alien communication is archeology, which is a good way to examine message deconstruction as it’s the only earth-bound example we have to study messages across time. We know that in ancient England, when people found arrowheads, they knew they weren’t from nature, but had no idea what they were. Maybe they were magic? Either way, these early archeologists could tell there was an intervention, and the shape was unlikely to be natural. The rock had evidence of intention. I knew that my message had to include this agency - but that didn’t need to be decoded for the simplicity of the message to be understood.
I was also thinking about math and all of the message composition attempts involving math that I had read about. Ultimately I decided to work with origami because it employs math, intervention, and sculptural poetic aspects. I ended up making origami ships in a bottle. The ship references our history of colonial enterprise, which is the same spirit, for good or bad, that is taking us off the planet and out into space. This aspect of the message is certainly for my fellow humans. 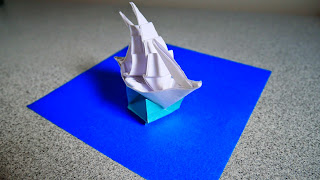