“…a power couple in which they both wore the pants, so to speak.”

Visiting the Detroit Institute of Arts last week-end for Diego Rivera and Frida Kahlo in Detroit was enjoyable, save for witnessing a backwater reaction to Kahlo’s Self-Portrait with Cropped Hair (1940). In this painting, Kahlo, then recently divorced from Rivera (whom she later remarried), wears a men’s suit and sports cropped hair, with strands of her long locks hacked off by the scissors she wields. With derision, a woman said, “Transgender” and her male companion scoffed loudly. I made eye contact with the man, who was closer to me, and exaggerated a look of disdain. Kahlo never felt entirely comfortable when she was based in Detroit during the period that Rivera toiled away on a modernist mural in the DIA for 11 months; posthumously, it would seem that she is denied full acceptance as well. 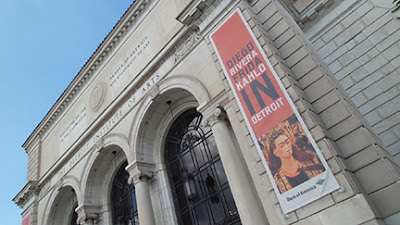 Curated by Mark Rosenthal, the exhibition runs from March 15 to July 12. It contains almost 70 works, primarily from their time in Detroit. When the Mexican couple arrived in Motor City, Rivera’s reputation preceded him, but Kahlo was relatively unknown, as demonstrated by archival material in the show. Rivera’s Detroit Industry Murals (1932-33) attracted as many as 10,000 visitors in a single day to the DIA, not without controversy, due to its socialist subject matter. Kahlo’s work during her time in Detroit is considered uneven, but she gained artistic direction there. If Rivera’s focus was external (i.e., a rumination on society), hers was internal. Over the course of the 11 months, she lost a baby and received word that her mother was dying in Mexico. Pain transformed into paintings that have ultimately captured the hearts of audiences as much as Rivera’s work has.

The accompanying catalogue is an asset, but it’s still worthwhile to see the show. Otherwise, the viewer would be bereft of many details. For example, the texture would be missed in Kahlo’s scarf in her wedding portrait, Frida and Diego Rivera (1931), as would the clotting effect of red paint that mimics blood in A Few Small Nips (1935), a work about domestic homicide.

Preparatory drawings are another highlight. Seeing one for Henry Ford Hospital (1932) beside the final work memorializing Kahlo’s abortion/miscarriage (1), one senses how isolated she felt in the city; the sketch has no background but the painting has the River Rouge Plant—Rivera’s focus for the mural—in the background. Given the difference in scale of Kahlo and Rivera's work (the smallest work by Kahlo is a self-portrait that resembles a cameo, measuring 1 9/16 by 1 3/16 inches), the show really gains momentum when Rivera’s mural cartoons are encountered. Their overwhelming scale can’t be captured in reproductions; you simply have to be in the room with them to feel the pulse of the life-size factory workers and scientists. Amazingly, they were forgotten in storage for decades. The show also contains film clips, such as Diego working on the mural; at the end of that particular clip, a black and white shot of a completed portion morphs into its colour version, reminiscent of the 'freeze frame' technique used by Julie Taymor in the film, Frida (2002), to effectively bring Kahlo’s paintings to life. 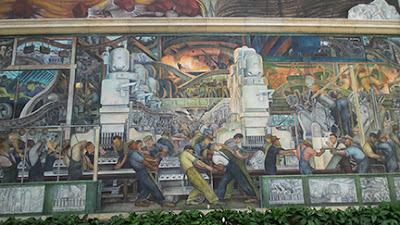 Diego Rivera and Frida Kahlo in Detroit is a fascinating slice of the artists’ careers and relationship. The signage throughout the show emphasized both artists’ experiences in tandem, giving a sense of Rivera and Kahlo as a power couple in which they both wore the pants, so to speak. At the end of the exhibition, the viewer is pointed to Rivera Court, where his mural (shown above) is located, arguably giving him the final word. Then again, since Kahlo’s work had never been shown at the DIA, the mounting of this exhibition (with 26 of her works) is a huge step forward.

(1) Grimberg argues that Kahlo's loss of the baby, previously considered a miscarriage, was induced by Kahlo. Grimberg, Salomon, "The Lost Desire: Frida Kahlo in Detroit", 148. In Diego Rivera & Frida Kahlo in Detroit. Detroit: Detroit Institute of Arts, 2015, 144-163.
Posted by Heather Saunders at 6:34 PM