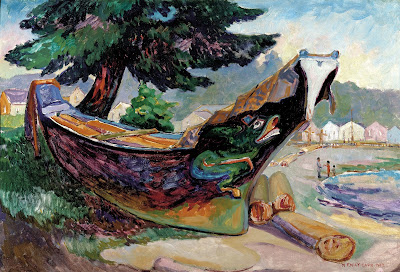 
It’s summer and I have accrued a blogging backlog. I like to think that Emily Carr (1871-1945), about whom I’m writing today, would appreciate why this post is delayed. I’ve been camping (read: communing with nature), walking the grounds of the Woodstock music festival (read: embracing bohemia), exploring the Pollock-Krasner studio, and dropping off art in Brooklyn.

On June 6, the Art Gallery of Ontario hosted a panel discussion, Emily Carr: A Gathering. Sarah Milroy, curator of the associated exhibition, From the Forest to the Sea: Emily Carr in British Columbia, was the moderator, and the speakers were filmmaker Jennifer Baichwal; writers Susan Crean and Susan Musgrave; and visual artists Silke Otto-Knapp, Jessica Stockholder, and Corrine Hunt.

Milroy began with what she called a “confessional exposé,” sharing how growing up in British Columbia informed her appreciation of the iconic artist. For instance, there were highly anticipated annual visits to a huge Arbutus tree on Savoy Island, which was consistently as big as she remembered. That a tree could captivate children is unsurprising, given Stockholder’s description of trees as metaphors, with their stillness, interconnectedness, and long life spans.

There’s something tantalizing about BC. Crean suggested that Ontarians have to learn the colour green in their first encounter with the province. Baichwal, meanwhile, recalled taking Edward Burtynsky—the subject of her documentary with Nick de Pencier, Watermark (2013)—to BC to see “a real watershed.” He was inspired to make his first purely landscape photograph during that visit. Like Milroy, Baichwal commented on the scale of nature in BC. Being raised in Victoria made her feel “totally insignificant and irrelevant,” a sensation that she relished. Tourist areas were flooded with trite landscape watercolours, which Carr might have dismissed as ‘curios’ (1). Even as a moody teen, Baichwal knew that Carr’s work was different. She “nailed it” in an “entirely unique” manner, translating the landscape without being decorative—without being clichéd, as Stockholder articulated it. Otto-Knapp assessed Carr’s work with fresh eyes, having grown up landlocked in Germany and being somewhat new to spending time in Canada from her base in Los Angeles. She described Carr’s work as more revealing of the artist’s hand than the nature she depicted. Perhaps this explains the visceral reaction to her work, which was expressed by Musgrave. She wasn’t simply documenting the landscape; she was emoting through powerfully gestural works. Her oeuvre reflects Baichwal’s take on documentaries: it’s possible to convey not objective truth but truth in the sense of “a real engagement with context.”

A personal connection with Carr was a common thread in the discussion. Milroy, for example, said, “Every time you tangle with Carr…you end up a slightly changed person.” Some of the speakers have historical connections with Carr and others feel an affinity with her to the extent that she has inspired new work. Carr reportedly painted at Musgrave’s first home near Sidney, which contains a 190-foot Douglas-fir tree cutting through the house. She admitted that she feels haunted by Carr in Haida Gwaii, where she lives now. In 1972, she wrote a poem about Carr, A House of One’s Own, which begins with, “I guess it’s in my blood/ to want to be like Emily Carr.” Hunt, who is of First Nations Komoyue and Tlingit heritage, has always had Carr in the background because her grandfather met and corresponded with the artist. Crean, like Carr, spent extended periods of time visiting First Nations people to inform The Laughing One (HarperFlamingoCanada, 2001), which was an attempt “to understand what she [Carr] actually knew.” Using Carr’s exchange of letters with a Salish basket maker and close friend named Sophie Frank, Crean and Shirley Bear did a performance at the Vancouver Art Gallery entitled Dear Sophie, Dear Emily (1996), a contemporary dialogue about art, appropriation and friendship in which they assumed their identities. Life came to imitate art: Crean began receiving letters addressed to Emily Carr, and she decided it was time for a break. Stockholder can be linked to Carr through a shared appreciation for First Nations art; in her installations, she has ruminated on the use of the oval in totem iconography. She was raised in Vancouver, where Carr’s work “was always around me…It was really everywhere.” Otto-Knapp made a watercolour portrait of Carr in Otto-Knapp’s current exhibition at the AGO, Land Lies in Water. As a watercolour painter, she said she relates to Carr’s assertive and economical choices about colour.

It was a timely discussion, with A Gathering occurring less than a week after the release of the report on the Truth and Reconciliation Commission, which exposed the horrors of the Canadian residential school system following six years of interviews with First Nations people. Milroy reflected on the “fraught endeavour” of including native aritsts’ work with a single artist from settler society who depicted native culture with fervour. Milroy didn’t want Carr’s work to overshadow the First Nations art, but she wanted to create a “colonial sensibility” and to encourage people to contemplate ancestry. Clearly it is important to avoid the trappings of shows like the 1927 exhibition that brought Carr overdue recognition, Canadian West Coast Art: Native and Modern, at the National Gallery of Canada. It combined confiscated First Nations works with modernist works, at a time when the government was trying to strategically obliterate their communities while also celebrating them. Hunt addressed this tension reminiscent of the Orientalist impulse in art. She said that when she was young there were always outsiders visiting Alert Bay, where she was raised, ranging from anthropologists to artists like Carr. As the residential school system mentality took hold, “Indian agents” appeared on the lookout for cultural expression and they were forced to be discreet. Potlatches were made illegal. She noted that a scene like in the painting shown here would have gone away for a period of time, but it is coming back. A case in point is the film Hunt made for an exhibition about living culture featuring school children in Alert Bay.

Culture can be suppressed, but it can also be taken away literally, like having totem poles relocated. This is the problem, Musgrave says, of something being recognized as art. Hunt said, “You can take away a piece of wood but you can’t take away what it represents.” Carr was determined to document a culture she thought was disappearing, but as Crean stressed, that hardly makes her an unproblematic heroine; for more on this discussion, click here. In the context of discussing repatriation, Hunt emphasized that it’s important to have soft hearts and recognize that people don’t set out to hurt one another. Milroy’s anecdote was complementary; she recalled a group of young Canadian First Nations people encountering a totem pole in Cambridge from their immediate culture that they had never seen before, and instead of being furious, they described it as a “miraculous encounter.”

The situation for First Nations people in Carr’s lifetime seems all too familiar today. One area where change is more obvious is the status of women. In Carr’s day, women were seen as having a delicate constitution unsuited to landscape painting. Milroy explained that Carr was both praised and abused for being “willing to go outside by herself.” This was a time when unhappiness in female patients was written off as hysteria, as was the case with Carr on a trip to Europe. Otto-Knapp described her travelling without support or connections as incredible and uncommon at that time. Milroy lamented that people have been stumped by Carr’s independence and how to categorize her in terms of relationship status. “She’s loved for her defiance of gender norms,” she said. Milroy confessed that she fought the impulse to ask how Carr’s work could become more relatable or more easily understood through “air traffic control of her vagina.” Touché!

Posted by Heather Saunders at 7:16 PM