“I never knew why I was so angry.” ~ Robert Houle

On February 25, artist Robert Houle engaged in a powerful dialogue with his friend and sometimes collaborator, Barry Ace, at Carleton University Art Gallery on Algonquin territory. Together, they have faced such challenges as needing an alternate venue because their work was considered demonic (shout out to SAW Gallery, who stepped up).

Ace described Houle as “an incredible writer” and introduced each of his images with an excerpt of his writing. Houle, in turn, has found inspiration in texts. For example, a former girlfriend sent him 13 poems while he was studying at McGill University, which prompted a series of abstract paintings later exhibited at the Royal Ontario Museum. Also, the Anishinaabe Saulteaux artist decided to address the residential school system as a result of reading Ruth Teichroeb’s Flowers on My Grave: How an Ojibwa Boy’s Death Helped Break the Silence on Child Abuse (HarperCollins, 1997). The book is about the Sandy Bay residential school system, to which Houle himself was subjected for over a decade (fortunately, Houle was able to return home on week-ends, preserving his culture in the process). The author contextualized the suicide of 12-year-old Lester Desjarlais. Houle, who knew many of the people in the book, decided, “I wanted to express it. It [art] was the only way I could let it go.” 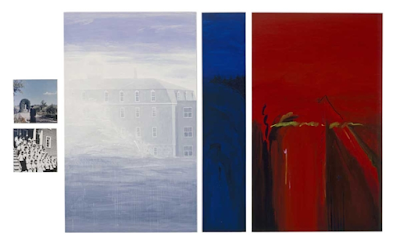 One such work, Sandy Bay (shown above), depicts the building where First Communion was given to students. It’s a curious sacrament to have been imposed on First Nations students, given that the Bible was off-limits, apparently because of the risk of misinterpretation. One nun did actually invite him to access it. He described another nun, a frustrated “mean old thing” who would whack Houle on the head at school when he didn’t eat the lumps in his oatmeal. Generally speaking, the memories of physical abuse faded, unlike the spiritual abuse that persisted. Houle revealed, “I never knew why I was so angry.” It wasn’t until he began making work about the residential school system that he “would feel fear on my [his] spine” and begin sweating as he recalled the perpetrators and authorities involved. He said, “I hid them [the works] for two years.”

His family members are also survivors, with his father having been one of many First Nations children malnourished systematically. When he showed the works about the residential school system to his family, they were deeply affected, to the extent that the university where the works were being shown offered access to psychologists, but they explained that they took comfort in family.

Family has played an important role in his artmaking. When Houle was a young artist, his mother said, “Don’t paint anything you don’t know.” That advice continues to resonate with him.

Houle didn’t participate in the Truth and Reconciliation Commission, because he feels that reconciliation is a “Christian ethos.” However, he did note that the commission is “part of our collective healing as Indigenous peoples in Canada.” History doesn’t always reveal pleasantries, but it helps him understand who he is, he says. And that sentiment can obviously be scaled to the nation.

Now, Houle says, “I’m not angry [anymore].” At the same time, he stressed the importance of understanding that the residential school system constituted “cultural genocide” and that it was a deliberate effort to eradicate First Nations culture. He has decided that his final exploration of the residential school system will be in the exhibition, Ritual and Ceremony, at the Art Gallery of Burlington this fall.

He also feels liberated. Houle explained that his whole life has been about being torn between what he is and isn’t allowed to do, and he relishes the freedom he experiences now. He says with pride, for example, “I am known as Blue Thunder,” evident in subtle queues like blue eyeglasses.

Back in 1981, Houle embraced liberty more overtly. He was the first Curator of Contemporary Indian Art at the Canadian Museum of Civilization, but he realized he “had to run away” because he disagreed with the museum’s approach to ‘artifacts.’ For example, he was disturbed by witnessing an ethnochemist open and examine a medicine bundle, which is “a living thing.” He realized it wasn’t the place for him. He left for Amsterdam, where studied Mondrian diligently and “flirted” with the Dutch artist’s style. Ultimately, he found Barnett Newman to be a better match for him, a connection that Ace described as organic. “Bingo!” Houle said. “I had found my spiritual god—small ‘g.’”

For all his accomplishments, such as being awarded a Canada Council for the Arts residency in Paris and receiving the Governor General’s Award in Visual and Media Arts, Houle is notably modest. He clapped at the end, although he had done the heavy lifting for the evening, and he referred to a striking abstract red and black Parfleches work (which alludes to spiritual maps derived from buffalo hides) as “just a painting.” Also, he claimed his memory was fading with old age, yet he regaled the audience with a solid two hours of anecdotes.