Artist’s Advisory: Sarah Oppenheimer at the Baltimore Museum of Art

“…the value of practice-led research…”

Kudos to the Baltimore Museum of Art and curator Kristen Hileman for highlighting the research process in a unique fashion. They have done so in relation to Sarah Oppenheimer’s permanent installation at the BMA.

As context, the New York-based artist worked directly with and in the museum’s architecture using materials associated with contemporary buildings, like reflective glass. My first impression of the commissioned works, W-120301 (2012) and P-010100 (2012), was that they seem to respond to qualities of mid-20th Century styles like hard edge painting and minimalist sculpture. I appreciated the museum’s use of the term ‘intervention’ to describe her work because W-120301 looked at home in a stealthy kind of way. For example, as I moved around the intervening work, the light shifted and cool blacks became warm blacks and vice versa, complementing Ad Reinhardt’s nearby, mostly black-on-black Abstract Painting No. 19 (1954). 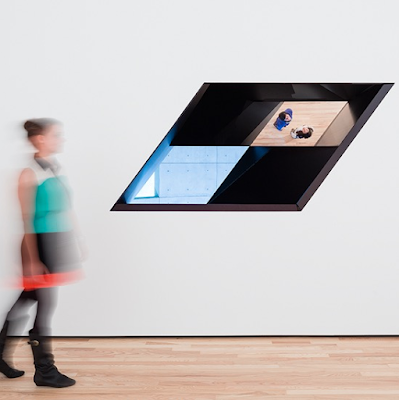 Around the corner from W-120301—past an exhibition space that currently features a photo show called, On Paper: Picturing Painting—visitors can view Oppenheimer’s preparatory work, namely architectural drawings and models. Also in the room is an assortment of texts that informed her work. From a librarian’s perspective, it’s fantastic to see the research of texts being given equal attention as other preparatory work. The reason I say that is that convincing studio students of the value of practice-led research is an ongoing challenge. I tell students that taking the time to research ideas for studio projects can prevent redundancy (read: avoid the production of work similar to existing work), lead to more nuanced work, and give them a broader context for speaking about their practice. All in all, it’s a tough sell and a tough slog.

The BMA’s presentation of the texts in question is noteworthy. A sign inside a translucent stand reads, “It is almost impossible to identify what drives the work of a single artist. [paragraph break] Here you will find a selection of books that have influenced Sarah Oppenheimer’s thinking and other books related to ideas in her work.” Stools beneath the table holding the books encourage perusal of the texts, while stickers discourage the removal of the texts.

For those interested in Oppenheimer’s work but who aren’t in a position to visit the BMA in person, here is a modest bibliography that captures the full assortment. (To access full citations, please see a source like WorldCat).

Additionally, there is a portfolio of articles described on the cover as excerpts from the artist’s research into cognitive science. The articles within are:

Without spending much time with the texts, a visitor can gain a greater appreciation of Oppenheimer's work. For instance, by reading the titles alone, I can now add situationism to the mid-century movements that pertain to her work and see her work as purposefully jarring.

Next to the books and articles, there is a mobile device containing interviews, such as a Q&A with the artist. In it, she speaks about wanting to inject a quality of the unknown in her work. With ambiguous work, a text-based entry point is always appreciated, and the reading area functions in this way. The reading area, in other words, creates balance by hinting at the known.

A few years ago, I developed a project proposal for artist files to be collected and preserved along with a selection of books (one from each artist who contributed a file on his or her own work). The original title was to have been, “Artist’s Advisory” as a riff on the library term of reader’s advisory—effectively, ‘if you like author X, try reading author Y.’ Multiple entry points would enable the user to encounter new authors or new artists, meaning that each file or book would go from being an end in itself to a means to an end. This project tested the Derridean notion of the end of the book. It sided with dancer-choreographer Twyla Tharp, who writes in The Creative Habit that the person you will become in five years depends on two factors, "the people you meet and the books you read" (p. 110). And it also sided with curator Hans Ulrich Obrist, who takes an even firmer stance by insisting that encounters with books can have a bigger impact than encounters with people (p. 202).

Though I was fortunate to partner with a gallery, I wasn’t fortunate enough to witness my project take flight. The BMA’s reading area, therefore, was like delayed gratification.

Obrist, Hans Ulrich, and April E. Lamm. Everything You Always Wanted to Know About Curating but Were Afraid to Ask. Berlin: Sternberg Press, 2011.

Tharp, Twyla, and Mark Reiter. The Creative Habit: Learn It and Use It for Life : a Practical Guide, 1st ed. New York: Simon & Schuster, 2006.
Posted by Heather Saunders at 9:05 AM